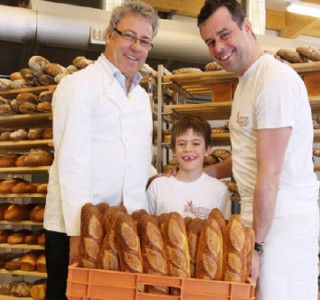 From the father to the sons for 3 generations...

27th of May 1949, our parents and grandparents, Armand and Anita, open their bakery in the heart of Verbier old village. Not much work otherwise a mixer, a furnace in parallel, a work table, so a bakery ! It is with philosophy and good mood that they work to supply the population and the summer in Verbier.

In 1955, they build below the small chapel of Verbier-village and install their bakery.

In 1979, after 30 years of trade, they go hand and hand over their son, Gérard, and his wife, Janine. Over time, « Michellod » bakery develops and grows as the same pace as Verbier station does.

In 1987 the family business opens its 1st branch at the street of Médran, followed in 1993 by the opening of the buffet-express located at the departure of Medran lifts.

Recovery « Gillioz » bakery in le Chable in 1999 is a big step further in our development.

Opened in 2008, less than 10 years later, our warehouse of Martigny and 5th branch, has been decisive in the future of our company. The particularity of this site is the creation of a visible customer along with a radius of confectionery production bakery. It is also the first but not the last point of sale located in plain.

It is therefore logical that in 2009, the enterprise moves to Sembrancher new plant artisanal to centralize and streamline the production to be ideally located geographically.

After 60 years, initially society changes, by its magnification, its future projects and its financial needs, a limited company, La Boulangerie Michellod SA. It remains however « family business » and is organized as follows:

Our philosophy has not changed since the first days: quality, service, modernity with lock the reward of the « label quality » obtained in 2000. Our bakery-pastry with as great slogan « the signature of the artisan ».